Photo by Michelle Phillips on Unsplash

I am going to talk briefly about something that happened to me the other day while writing some unit tests. I discovered a feature from IntelliJ IDEA that was hidden to me and bugged me for a few minutes.

While doing Test Driven Development (TDD), I wrote a test for a method where passing a null value, it would throw an exception. In our project we use AssertJ, a good library for assertions which I personally love compared to Hamcrest.

I wanted the code to throw a NullPointerException when a null value was passed, so I called Objects.requireNonNull(...). Additionally, I thought of adding a @NotNull annotation to improve its usability (specially if we later decide to use Kotlin 😁).

I run my test suite and the test failed with the following error:

My bad, I made a mistake. Let us replace the expected exception and problem solved.

Indeed that solved my problem.

When I finished writing my code, I commited my changes and pushed them to my remote GIT repository.

What was my surprise when my Continuous Integration (CI) pipeline failed with the next message:

This was me puzzled. What is going on!?

Following, I did something I admit I should have done in the beginning, I went to check the implementation of Objects.requireNonNull(...).

So I actually wrote the test right in the first place! Why is then IntelliJ IDEA failing with a different error?

Finding out the issue

I did some research and it turns out this is not a bug, it is a feature from IntelliJ IDEA 🤦‍♂️. Apparently IntelliJ IDEA adds some runtime assertions for @NotNull annotated methods and parameters.

Fortunately, this can be disabled in the Settings (or Preferences, depending on your OS) of IntelliJ IDEA. Go to Build, Execution, Deployment > Compiler. We must disable the option Add runtime assertions for notnull-annotated methods and parameters: 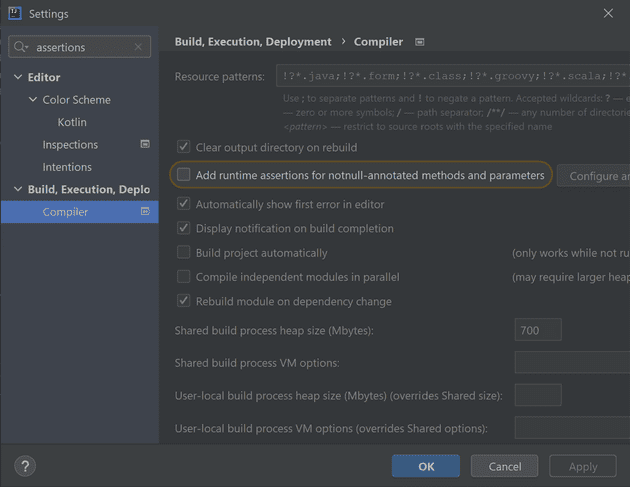 This is the option to disable.

After disabling that option, my test had the same result both in my machine and in the CI pipeline. Nice!

Note: If that did not work straight away, you may need to invalidate cache and restart your IDE and/or rebuild your project.

If you were puzzled like me and were looking for a solution or just to throw some light into the issue, I hope this was helpful!

Get the latest updates in your inbox 📨

No spam. Unsubscribe as your heart desires.

The missing part of the documentation

I launched my blog and despite my desire to focus on writing, I rewrote it from the beginning